Inyathelo remembers with great respect Dr Frene Ginwala, noted for her contribution to the struggle for a non-racial, non-sexist, democratic South Africa. She was renowned for promoting good governance, human rights, development and security. 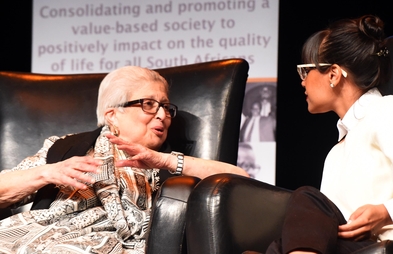 Dr Ginwala completed her LLB degree and  later completed a doctorate in history in the United Kingdom. She returned to South Africa to complete her legal training, prior to the banning of the African National Congress (ANC). She later  worked in Tanzania, Zambia, Mozambique and the UK as an ANC official and as a journalist and broadcaster in East Africa and Europe.

While in exile, Dr Ginwala headed the Political Research Unit in the office of ANC President Oliver Tambo. She also served as ANC spokesperson in the UK on sanctions, the nuclear programme, and the arms and oil embargo relating to South Africa.

Dr Ginwala has held various influential positions in the ANC and other organisations, and is particularly well known as the  Speaker of the National Assembly during the first critical decade of South Africa’s  democracy, Other influential roles included serving as a board member of the International institute for Democracy and Electoral Assistance;  Chairperson of the Southern African Development Community Parliamentary Forum; membership of the United Nations Secretary-General's Advisory Panel of High-Level Personalities on African Development; and  Commissioner of the International Commission on Human Security. Dr Ginwala was also a Trustee of the Nelson Mandela Foundation and Chancellor of the University of KwaZulu-Natal.

© Inyathelo | The South African Institute for Advancement. All rights reserved.

Inyathelo subscribes to The Independent Code of Governance for Non-Profit Organisations in South Africa.
Email: | Phone: 021 465 6981/2